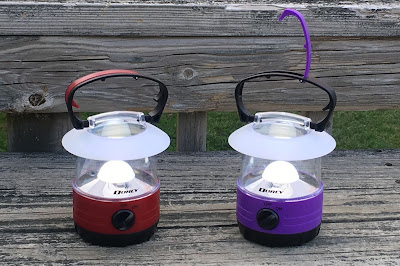 The Dorcy LED Mini Lantern operates on four AA batteries and the manufacturer claims they will run for 70 hours on a set of alkaline AA batteries. The gals and I tested one of our lanterns with a brand new set of Amazon Basics AA alkaline batteries and while the lantern's LEDs did dim down a bit at the end... they lasted just over 76 hours!

They don't even list the lumens for the four little 5mm LED bulbs that light this lantern, but these lanterns are not meant to light up a 400-yard perimeter at the bug-out compound. What they do well is lighting up areas of your home during a power outage or a tent while camping. A hook is built into the carry handle and folds out to hang the lantern in your tent, or from many things as the lanterns don't weigh much at all. 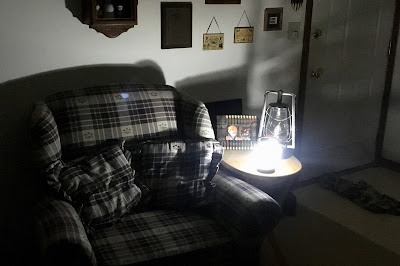 In the photo above taken with the iPhone... you can see that it throws a nice, even white light for 360 degrees around the lantern. We've even knocked one of ours off the kitchen table... it hit the hard floor and bounced a couple of times, but never broke.

There are better, brighter, and more rugged products out there like the Streamlight Siege X, but when you can pick up one of these for under six-bucks... or a three-pack with batteries for under seventeen-bucks at Amazon... they're easy on the budget. We've had a couple of these lanterns for over two years now... and recently picked up a couple more. They were worth every penny this winter during a two-day power outage.

So... our recommendation for Every Day Preparedness for Regular Folks: The Dorcy LED Mini Lantern...

Email ThisBlogThis!Share to TwitterShare to FacebookShare to Pinterest
Labels: Every Day Preparedness for Regular Folks, Other Stuff, Prepping