Why do you yell at your targets?

The gals and I are fortunate to have our own shooting range out back... it allows us to shoot regularly... pretty much whenever we want. Sometimes friends, students, and others will join us for some shooting fun, practice, and training. Not too long ago, I had a friend over do some shooting and he asked me, "Why do you yell at your targets?" 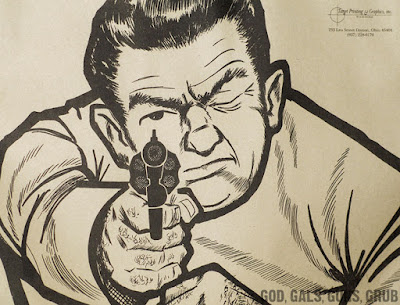 Thinking outside the box and thinking practically more than tactically, the gals and I try to develop our self-defense skillsets, mindsets, and tools around reality, not some Hollywood fantasy or tactical-fanboy ego strokin'. I see shooters practicing the scan-and-assess head swivels on the range and I see a lot of shooters practice the "step off the X" move when drawing and shooting... but I don't see many, if any, practicing their verbal commands, verbal judo, and communication skills while shooting.

We're big fans of visualization and a great source of material to think through and pre-visualize can be found in the videos over at Active Self Protection's YouTube Channel. Watch some of the videos... consider John's commentary... and think "what would I do" in that situation.  Everything from mindset, to awareness, to marksmanship, to empty-hand, to firearm handling, drawing, and manipulation and many more come into play.

So why not add some practical practice of your verbal commands and verbal judo into your practice work? In addition to what you're going to do... what are you going to say? You stumble onto an intruder in your living room in the middle of the night... what are you going to say? A road-rage driver departs his vehicle and aggressively starts towards you with a thirty-inch steel crowbar in his hand... what you you going to say? Yes, there are situations and contexts where there is little time for verbalization, but if your situational awareness is active... you may be able to counter a problem with some verbal commands, judo, or de-escalation.

When I've taught students simple self-defense scenarios in situations ranging from shooting courses to the NRA's Refuse To Be A Victim program... so many have difficulty deciding what to say when confronted by an adversary. "What are you doing in my house!" Do you really want an answer or have a conversation with this person? A gal has noticed the same guy consistently following her throughout a store, then into the parking lot, down the rows of cars... is "Excuse me, can I help you?" or "Why are you following me?" the best verbal communication? Again, do you want a conversation or do you want them to decide to go a different direction. "STAY BACK, QUIT FOLLOWING ME" with some solid, leave-no-doubt body language might be more effective.

The next time you're on the range, drawing from concealment, or just practicing shooting for self-defense purposes... try visualizing a scenario or context and think about your verbal response. Then practice it... "GET OUT OF MY HOUSE! WE'VE CALLED THE POLICE!"... "DROP THE WEAPON, GET BACK!" If you think you'll know what to say or have time to think it through in the moment, you won't. Another benefit to yelling your commands in some situations is that their is a better chance they will be heard by your attacker and witnesses... and the yelling will force you to breath... something many people forget in tense moments or situations.

If you want to develop your verbal skills, there are a lot of good resources out there. One book I've read twice over the last year is "Conflict Communication" by Rory Miller. Another good source are articles written by our friend, Greg Ellifritz of Active Response Training including "Insults and Challenges- 5 Tips for Effective Verbalization During a Violent Encounter" and "When the Criminal Doesn’t Obey your Commands".

Be prepared... have some verbal commands and judo ready-to-go in your EDC... and in addition to stepping off the "X", scanning and assessing, moving to cover, or whatever else you've chosen to do to prepare for a defensive encounter... try visualizing AND verbalizing while practicing your empty-hand and shooting skills. Maybe... the next time you're practicing at the range... someone will ask you... Why do you yell at your targets?