It's been almost ten years since Ruger introduced the SR9 and SR9c pistols... and more than eight years since our family adopted the SR9 and SR9c as our primary pistols for home and self-defense.  We own... well, let's say more than six and less than twelve of the pistols covering what I'll call the "three generations" of Ruger SR9's and around here... if we're not wearing one, there's one pretty close by.... like within arm's length. 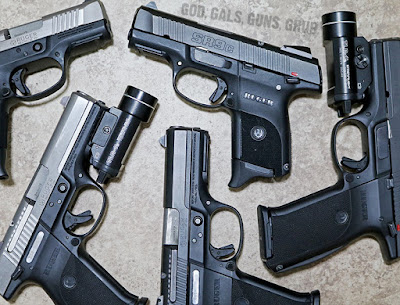 It may be hard for some to understand why we chose the Ruger SR9 and SR9c pistols... but the key word there is "we"... the gals and I. Some of the many factors included our previous experiences with Ruger products.  Ruger may not always build the prettiest firearm... although many look pretty good... but they are usually built like a brick outhouse and just like a brick outhouse, they function pretty reliably.

Other factors at the time included the grip which worked for all three of us... and while I prefer no external safety, my main gal did.  I'll also admit my bias for all things Ruger. They're a debt-free, all-American made company that builds a solid product at a good price.  Price was one of those considerations because at the time... we needed multiple pistols... looking at options like the Glock Gen3's and the Smith & Wesson M&P9's... the Ruger pistols were the best solution/compromise that worked for everyone in the family.

Now, all that being said... if we're going to trust our lives to a particular firearm... we needed to put it to the test. Typically as a personal rule of thumb, we don't trust a gun for personal defense until I've had at least 500 rounds through it with 300 rounds straight without a single malfunction due to the firearm and 100 of those five hundred rounds being the selected self-defense ammo for that firearm... fired without malfunction - period. I see too many people buy a pistol, shoot a few rounds of FMJs... slap in some self-defense ammo... and start carrying the gun... not us.

So... back to the title of this post. A previous post about our primary "practice" gun passing 18,500 rounds indicated the success we were having with these pistols. That particular gun has now passed 32,800 rounds... and in actuality, probably over 33,000 rounds because there are some occasions when a little bit of shooting here or there doesn't get logged. It still functions reliably with quality ammo... mostly Winchester white box, Federal, American Eagle, and reloads with 115gr. FMJs and either Federal HSTs or Winchester PDXs for self-defense purposes.

Yes, the gun has had some double feeds, stove-pipes, and other ammunition or human-error malfunctions over time, but nothing we could attribute to the firearm directly. As a percentage of total rounds fired... it's less than 0.3 percent overall. While it can be "limp-wristed" into a malfunction, it is actually pretty reliable when I've tried to purposely limp-wrist-fire the pistols. So as far as reliability goes... all told, we have well over 50,000 rounds through multiple Ruger SR9 and SR9c pistols over the years and the lowest round-count pistol has 1,820 rounds through it. If you want my opinion... you can rely on these pistols.

Now as a firearms instructor for many years... people usually ask, "What should I get for concealed carry or self-defense?" While my motto is "I educate, You decide."... if they press... my standard answer is, "Get a Glock or a S&W M&P in 9mm... you can't go wrong." Wait, you're carrying a Ruger SR-series every day... yes I am... and I'm OK with that... not that it's perfect... I don't like manual safeties... I carry it safety-off, yet my thumb indexes on the safety every time I draw to make sure it's off... my gal carries safety-on... her choice.

So everyone has to make their own decisions... and the ol' Ruger SR9 is finally going to get a rebuild... original springs are going in the trash... YES, original springs... and we can't see any visible signs of cracks or potential problems with the polymer frame, action, barrel, slide, etc. So for now... we'll keep the Ruger pistols as our standard family defensive pistol... and we're OK with that... after... 32,800 rounds through a Ruger SR9...
Posted by God, Gals, Guns, Grub at 10:00 AM