A while back I had a friend call me for some assistance with a flat tire on his wife's car. He had tried to use the jack he found under the little "rubber donut" of a spare tire and the jack wasn't working right, started to bend, and he thought the car was going to fall right off of it. I grabbed a 3-ton floor jack from out in the barn, some deep-six-point-sockets, a breaker-bar, some wheel-chocks, and headed over to help him.
You see, they carried this jack around in this car every day since the vehicle was new. They never even looked at the jack, read the directions, or even tried it out until they needed it. Fortunately, the car was at home and not along the side of the road or near busy traffic or in an unsafe neighborhood. Like most folks... including most gun folks... he just assumed that it would work when he needed it and he'd figure out how to use it.
He didn't realize it was probably the cheapest solution the company could provide, or that the little base-plate on the jack would likely sink right into the grass or dirt if he had actually tried it along the side of a road or along the berm or median. He had just never used it to lift the car and change the tire... and put it through the rigors of likely contexts that the jack would be used in... he never "tested" it.

"Test all things; hold fast what is good."
1 Thessalonians 5:21
Folks, this is the exact same situation for many folks who decide to carry a firearm for self-defense. They've never really used their holster beyond maybe daily carrying, or to draw and fire at the range on occasion... let alone drawing under the stress of a shot-timer... or maybe they've never even drawn and fired from their holster since a lot of shooting ranges don't allow it. 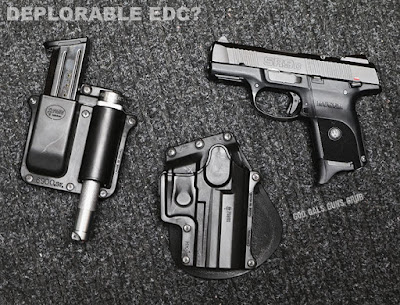 Most of these folks... like many of those "in the industry"... have never faced an actual threat out in every day life where they had to roll on the ground and get dirt or gravel jammed-up in their holster mechanism... or had a thug grab for their gun and tear their holster right from its rivets. They walk into the local gun store, sporting goods store, or Wally World and see Fobus and Blackhawk SERPA holsters for just about any and every handgun made... and they're not too badly priced either.
After recently shooting the GSSF Indoor league match down in Cincinnati at a very popular, state-of-the-art shooting facility... I took a mental note as I looked around and noticed that every single employee... you know, the experts, were wearing sharp looking red polos with the company's logo, tan or khaki tactical pants, and all but one employee was openly carrying a handgun in a Blackhawk SERPA holster.  They MUST be great holsters, right?
I've also noticed that many of our local law enforcement officers carry in Fobus and SERPA holsters while off-duty. If all that wealth of experience dealing with bad guys daily has resulted in selecting a Fobus or SERPA holster for off-duty carry, how could any average person go wrong with a similar choice? Besides, they've never heard of Henry Holsters, Comp-Tac, Raven Concealment, or many of the other quality Kydex makers out there.
Why should they listen to some "in the industry" writer, trainer, or talking-head they have probably never heard of or just "liked" their FaceBoook page... when they've got someone with the appearance of great authority, knowledge, or experience close to home providing them advice.

This is why these "Deplorables" of the gun world give more credence to an NRA Certified instructor, military veteran, or a local police officer when it comes to firearms than some RangeMaster guy named Tom Givens they never heard of before. Unfortunately, many of the best instructors, sources of information, and authorities in this field are either "preaching to the choir" or they... or their followers/commentors... turn them off the instant they dare ask a questions or communicate something that is not the current tacticool standard or flavor.
With extensive anecdotal proof on social media... and my own experiences and observations... I believe there is a silent majority out there of gun folks who are probably considered "Deplorables" by many of those "in the industry".  These are the over-weight, Taurus Judge in a Fobus paddle holster, under a shoot-me-first-vest... that I see in southwest Ohio... and all over the country. These are the .38 snubby, that's-what-the-guy-at-the-gun-store-recommended, in-my-purse mom's I run into rather frequently.
Many of these folks, if the dare wander into the social media venues or around gun-counter-commandos... are immediately eaten like a pack of coyote-minions on a wounded deer for daring ask a question about... or even mention... their holster or firearm choice that's not the flavor of the day. There is no way for them to discern or verify the information from a Tom Givens, Greg Ellifritz, Rob Pincus, or even an industry-niche market sensation like Ballistic Radio's John Johnston in comparison to what their local police officer friend with 20 years of experience or the guy with two tours in "the sandbox" just told them.
So where am I going with this? I didn't write a blog post during 2016, but I've decided to get back to blogging in 2017 because I enjoy it and at least in my local area and my local region... there are a lot of folks that I can help.  I can meet them where they're at... provide good training at a reasonable cost... and promote firearm safety and self-defense...refer the to other quality training and learning sources.  My motto and goal has always been... and still is... "I educate, you decide!"
Also, last year I really felt like anything I had to say or blog about had already been said by folks more qualified than myself. The thing I have found is that most of those highly qualified folks that I respect... don't reach... or are completely unheard of by the majority of every-day American gun owners and carriers.
I'm here to meet folks where they're at... with my ellipses.. focusing on my geographical region... educating and assisting folks... about Fobus, SERPA's, and Car-Jacks... the Deplorables.
Posted by God, Gals, Guns, Grub at 10:00 AM